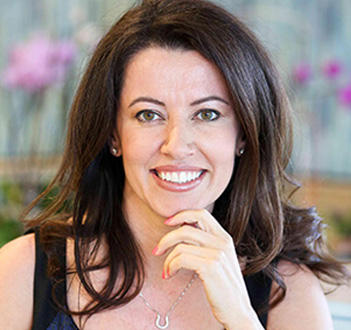 She has been speaking publicly since she was a teenager in Ohio, after emigrating from the Transylvania region of Romania. “I had to work very hard to get where I am today – in the privileged position of being able to help others transform their health and lives, she says. “I am proud to be living proof of how persistence, perseverance, and patience can help anyone achieve their dreams.”

Believing health issues that manifest in the mouth are key indicators for one’s overall health, she is a frequent speaker on periodontics and nutrition for Nobel Biocare – the world’s leading implant company. She lectures on dental implants and nutrition for a healthy mouth at the UCLA School of Dentistry and is a faculty member of Global Institute for Dental Education (GIDE). An official spokesperson for Waterpik, Dr. Moldovan is the ‘go-to’ oral health expert for the Emmy-award winning syndicated daytime television series “THE DOCTORS.” She is a widely sought after oral health expert by network television shows such as NBC and CBS. She is an editor for the Inside Dentistry magazine, and is a regular contributor to The Huffington Post.

She is a graduate of Ohio State University School of Dentistry. From there she went on to the University of California Los Angeles, for post-graduate periodontics training. She earned a Master of Science in Oral Biology from UCLA. Additionally, she is a trained and certified nutritionist as well as an American Academy of Periodontology (AAP) diplomate. Her professional affiliations include active membership in the Academy of Anti-Aging medicine, American College of Nutrition, and Academy of Laser Dentistry.

She stays on top of the latest research and technology in her fields of expertise, particularly laser and minimally invasive techniques in dental implant surgery, periodontal plastic surgery, and nutritional support. Her book, “Heal Up!: Seven Ways To Faster Healing And Optimum Health” is being published on September, 20th, 2018.

Dr. Sanda Moldovan’s office is mercury free (silver amalgam filling free) and mercury-safe. She is committed to practicing safe and healthy dentistry and using her high visibility in the public to educate and create greater awareness of the importance of how a healthy mouth translates in to a healthy body.

Rating : 5 If you’re looking for an outstanding implant surgeon I would highly recommend Dr. Sanda Moldovan.

I had a consultation with Doctor Moldovan and my dentist to discuss how to replace dental work that was done many years ago and now failing. The decision was to proceed with a procedure called an All on 6 for the upper and new crowns on the lower. My dentist then completed the necessary prep work which entailed making a temporary upper denture to be used after implant surgery. Dr. Moldovan provided me with her pre and post-surgical instructions which included nutrition supplements to help with the healing process.

On the day of surgery Dr. Moldovan had quite the task, the extraction of twelve teeth and the precise placement of nine implants, six of which had to line up perfectly with the six holes in the temporary upper denture. Dr. Moldovan’s surgery went great and I was pleased with the amazing results of my new smile.

Post-surgery I had very little discomfort and no bruising. Within days I was able to eat most meals that I enjoyed prior to surgery. After a few post op visits with Dr. Moldovan to check on the healing of the implants, it was time for my dentist to replace the temporary upper denture with a permanent Zirconia bridge and lower crowns.

My sincerest appreciation for your amazing skills.

It never gets old hearing from friends, family and people I don’t even know say, Wow! what a great smile you have, at which time I smile again and give credit to my implant surgeon Doctor Moldovan along with my dentist. Read more... Read less... Eugene B.